Fernando Belasteguín, number 1 ranked padel player for 16 years and CUPRA ambassador, faces one of the biggest challenges of his career: hitting a 70×50 cm target from a height of 36 metres with a precise stroke.

Six o'clock in the evening, Barcelona. Fernando Belasteguín, better known as "Bela", is preparing for one of the most difficult strokes of his sporting career. Although he is a padel legend and has been the longest-standing number 1 ranked player in the world for 16 consecutive years, he still admits that he didn't think this challenge could be done. "But now I'm not leaving here until I hit." 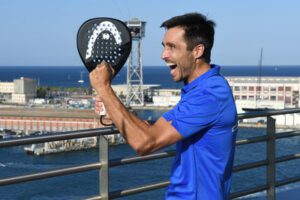 Fernando Belasteguín - long-time No. 1 in the padel world rankings

Bela's task:
From the eighth floor of a building in the port of Barcelona, Bela is to hit the ball through the open 70×50 centimetre sunroof of the CUPRA Ateca (Seat), parked 36 metres below, with a unique stroke. Biophysicist Enric Álvarez from the Polytechnic University of Catalonia analyses the requirements.

"The stroke must be executed with great accuracy. It must have the right angle and the right speed. This stroke is practically impossible," says the scientist. An added complication: the lob is considered Bela's best stroke, but for this task it will not help him.

"I think I will have to hit the ball like I have never done before," he says.

When Bela goes out onto the terrace, he feels the wind, another difficulty. Near the sea and from such a height, a gust of wind could jeopardise even the most accurate shot, he has to choose the right moment.

Physics and biomechanics under control:

Bela takes a few steps back to be able to swing unhindered, throws the ball into the air, takes a swing and hits. With an angle of inclination of 10 degrees and a speed of 54 km/h, the ball falls into its target.

Bela celebrates the achievement:
"Who would have thought that after 30 years of playing padel, I would have to try a new swing to meet the challenge of CUPRA?"

"What he achieved was amazing, given all the difficulties involved: it takes excellent biomechanical control," Álvarez sums up.

The duel between Bela and CUPRA is not over yet:
"I hope I will be given a new challenge by CUPRA soon. Whatever it may be, I will try to do it again." 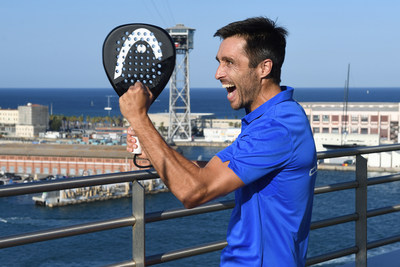 When Espelkamp is mentioned in the same breath as metropolises like Munich and Milan, then the well-informed sports expert has long known: The 2015 padel tournament season has begun!

We have expanded Padel-Test with the section "Padel Locations Europe". There you can now find Padel facilities from the Netherlands, Belgium, Poland, Italy, England, Sweden, Austria and Switzerland...

Why di Santo is really moving to Schalke!

Suddenly everything happened very quickly - the rumour that di Santo wanted to move to FC Schalke 04 quickly became certainty this morning. Of course, many football fans now think that he is going to the Blue and Whites because of the money. But the reasons for the move lie elsewhere...