Open letter to the DPV

On the website of the German Padel Association you refer to yourself as its president.

Since the DPV regularly does not reply to emails, we (as DPV members) now choose the path of an open letter.

Specifically, we would like to ask you for your opinion on the following matter:

Instead of being happy about this appointment or congratulating and supporting the player, you called the organisers (we have several witness statements on this) and stated that Mr Nowicki had been banned from all padel events by the DPV. A very unsportsmanlike step and also counterproductive for the development of German padel.

Furthermore, we are not aware of any suspension of the player Darek Nowicki.
Not by a single padel player in Germany, by the way.

As members of the DPV, we therefore ask you to explain the following to us:

2) When and how is Mr Nowicki supposed to have been suspended by the DPV?
Such a ban cannot be imposed arbitrarily and would have to be decided at a general meeting or at least presented there. There has not been a single reference to this in any general meeting since 2010. Furthermore, the player would have to have been informed about this and also heard. This has not happened either. So what are you referring to when you talk about the player being suspended?

We look forward to your reply as soon as possible.

-> The signatories are all full members of the DPV 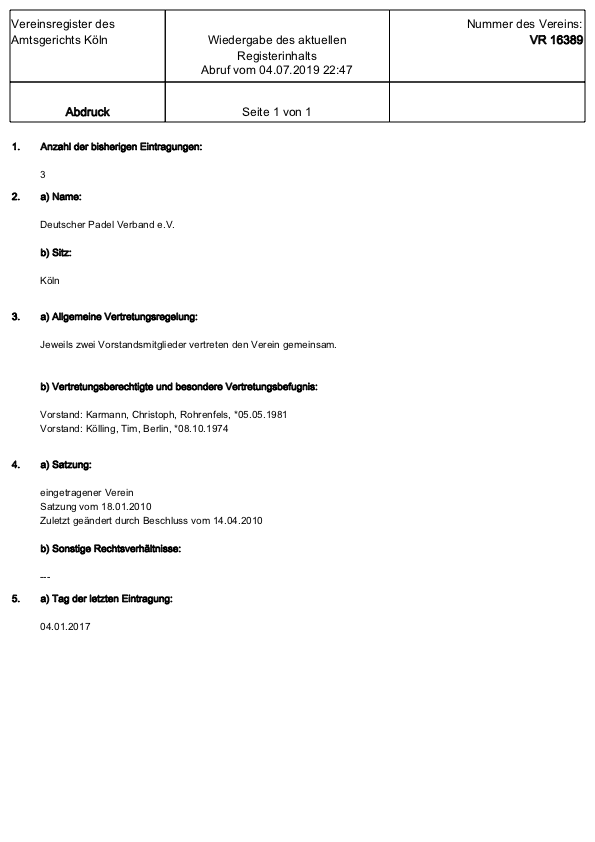 Shortly we will also publish a detailed article about the General Assembly of the DPV on 19 May 2019 in Hamburg.

Central meeting of the German Padel Community on 17.11.2018 in Karlsruhe

Due to the ongoing standstill in the development of padel sports in Germany, a large group of neutral padel players, padel coaches, padel locations and padel supporters have come together to finally cut the Gordian knot with a central meeting and help padel to break through in Germany. In a...