Padel Trainer Seminar on the courts of the Padel-Base Werne

On Sunday (11.03.2018) the padel courts of the Padel Base Werne another padel trainer course of the DPB (German Padel Federation) took place under the direction of Thomas Lönegren. A total of 5 participants took part in the Padel Trainer Seminar 1.0, i.e. the introductory seminar for aspiring padel trainers, led by DPB instructor Thomas Lönegren. 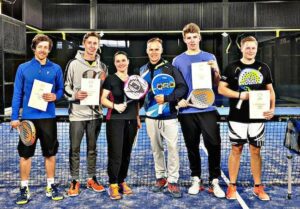 Padel Trainer Seminar 1.0 at the Padel Base Werne

The fifth member of the group was Eike Boll, lecturer for rewind games/racket sports/racket sports at the Institute for Sports Science at the University of Münster, (now almost 60,000 students!) who wants to bring padel into the hearts of the students there and firmly anchor padel in the sports programme at the University of Münster - which is why he has already presented padel in seminars and held his own "on court" seminar units.

In doing so, he tries to find commonalities/connections between different racket sports in order to enable transfer learning. From April onwards, padel will be part of the sports calendar at Münster University!

We are already looking forward to the next Padel Trainer Seminar!

The cost of a Padel Trainer Seminar is 199,- Euro per participant.
The next dates will be published shortly on this page at Padel events and on the Website of the German Padel Federation announced.

Fermin Ferreyra, the current No. 133 of the World Padel Tour (WPT), will be giving exclusive padel training sessions at the TVN Padel Essen facility - and you can be there too! From Thursday, 01 March to Friday, 05 March, "Batata" Fermin Ferreyra will work his magic on the Essen Padel Courts ...

The first DPB training camp of the year took place at the weekend (16-18 February) at the Padelbase Werne.

As in the past, it was led by Jani Gisbert, Alberto Melgar and Thomas Lönegren.

And there was plenty of support on site from the operators of Padelbase Werne, Simone and Thorsten Kirsch, who provided great catering....

The Padelbase Werne Open as the first padel tournament of the German Padel Tour 2018 will take place as GPT 1,000 (Men's Category 1) and GPT 250 (Men's Category 2) on 3 and 4 February in Werne. Host Simone Hirsch played the fairy godmother and drew lots of exciting matches.

The men's category 2 will take place on Saturday from ...

Condor Padel Hamburg: Good news for those interested in padel around Hamburg: SC Condor is offering numerous opportunities for young people for the coming padel season starting in April. Youth padel training: From April - October 2018, SC Condor will once again be offering youth training. The youth training is aimed at padel players aged between 9 and 16 years....

Padel Base Werne: On Sunday 17 December, Padel Father Christmas will come to Werne and bring two brand new Padel courts of the brand "Trend sport Rummenigge"with. The construction work has been completed in the meantime and on Sunday, 17 December at 12.00 noon, the time has finally come: the two padel courts and a multifunctional court will be...