At Padel TVN Essen For the first time in Germany, an advanced training course for B/C coaches with the topic of padel took place for a weekend within the TVN Tennis Centre in Essen. 22 participants were trained by the lecturers Thomas Lönegren (Licensed Padel Trainer) and Daniel Lingen (national padel player) were guided over two days on and next to the two padel courts in the TZE through an extremely practice-oriented advanced training programme that addressed, among other things, technique analyses, methodical measures in training and their implementation as well as the organisation of training operations. In Essen, for the first time in Germany, tennis coaches for padel were trained over the weekend in an advanced training event.

The offer on 22 and 23 October was the first official advanced training for B/C coaches on the topic of padel in the whole of Germany - after the NRW Padel Open co-organised by the TVN, which a few weeks ago had developed into the largest padel tournament in Germany to date, another mosaic stone in the association's efforts to set an early course in the area of this rapidly developing trend sport.

22 participants were trained by the instructors Thomas Lönegren (Licensed Padel Trainer) and Daniel Lingen (National Padel Player) over 2 days on and next to the two Padel courts guided through an extremely practice-oriented training programme at the TZE.

Finally, the focus was on practice and fun in a tie-break tournament.

In the future, further training in the area of padel will be regularly included in the canon of training and further education offers for tennis coaches at the TVN. 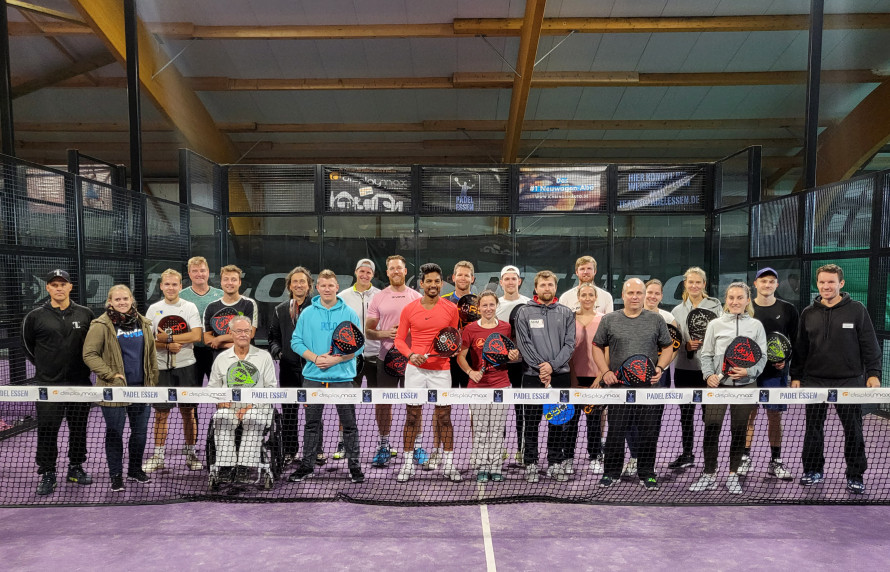 Through a new system of prices and offers, the Paddling in Essen even more attractive. Whether alone or in the company of other curious people - those who haven't tried it yet should do so as soon as possible. Just in time for the padel winter season, the Essen tennis centre has introduced the new price and offer structure for the Padel facility at the TZE in Essen published. The tariffs have been slightly modified and many exciting offers have been created...

Free taster course for all children and young people with and without racket sport experience.
Rackets and balls are provided. Please bring sportswear and indoor shoes with tread. Registration directly with the padel specialists of TVN Essen...

Back in November 2016, the padel facility of the TVN PADEL a new tournament series in Essen, the TVN PADEL Series. Since then, more than 8,000 points have already been awarded to a total of 75 players in four different categories of play. So far, the two Dutchmen Peter Bruijsten and Bram Meijer, who are leading in the highest endowed Masters in mid-February,...

The first rays of sunshine are still seeking their fortune, there waits TVN PADEL in Essen with a special offer. The TVN Padel "Summer Specials" are monthly subscriptions with a limited number of participants for the summer months of June to September....