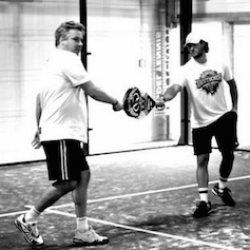 Padel Test:  Hello Andreas, we are pleased that you took the time to talk to us about your tournament series "YOORNA International Open". We are sure that you are already planning the 4th Open and we would like to know why you decided to come to Spain for the 4th edition?

AndreasThe idea for the YOORNA Open was born in 2014 after the World Championships, where we were able to gather a lot of international contacts and noticed that there is a lot of interest in competing at the top level in Northern Europe.

Therefore, we wanted to give the players the opportunity to compete against each other at a strong level outside of a world championship, as it is usually difficult to find opponents locally who have an appropriate playing strength.

After 3 tournaments in Germany, Spain was now the next logical step to invite this Northern European elite to the motherland of paddle to compete with local greats of paddle sports and to gain international experience.

Padel Test: What do you think has happened in European padel after the 2014 World Championship in Mallorca?

AndreasWell, we saw at the recent European Championships in Holland how enthusiastically other countries are promoting the sport of padel and how Sweden, France and Italy in particular are trying to push the sport further and further.

The gap to Spain or Argentina is certainly still very high, but hopefully it will narrow over time. In any case, the signs are very good.

Padel Test: What do you expect from the 4th YOORNA Open?

AndreasAbove all, a lot of fun. Many people outside Spain haven't really understood why padel is so successful in Spain. It is not ONLY a sport, but a social event where the whole family comes together. There's food...there's music...that means we'll have a huge paella and also a players' night in the port of Estepona, where we'll celebrate: a place that's truly paradise - on the beach with palm trees and the sea.

This spark of lifestyle still has to jump over for the sport to make a huge leap forward.

Padel Test: Wow...we certainly won't miss it and we'll definitely see you swinging a padel racket in Estepona at the end of February.

AndreasAnything else would also be a waste of time...(and he winks at us).

We are very proud, thanks to our sponsors, to announce this tournament. FIP250 men and FIP100 women. First YOORNA Padel PadelShop.com tournament. Total € 3500,- price money. 2-4 december. Possible qualification on thursday 1st december. We will do everything we can to make this a tournament to remember. ..