As one of the first German companies to distribute the padelexpert Gbr high-quality products around the padel sport. The main focus of the company from Trier, where it is also the first padel court in Rhineland-Palatinate has installed, lies on first-class padel courts, which can be offered in 2 variants and which have already been tried and tested in Spain for many years.

padelexpert was founded by the padel friends Markus Grundhöfer, Gerwin Stupperich, Frank Wiebeler and former stadium announcer Ralf Wigger. In addition to the courts, padelexpert also sells a large range of padel racquets and balls of the brands Nox and HEAD.

Services padelexpert at a glance 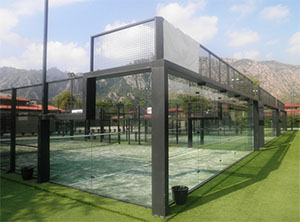 padel-karlsruhe.com - Oliver Klenert & Jochen Vey GbR: The company based in Karlsruhe was founded in 2016 on the occasion of the construction of the 4 Karlsruhe padel courts. The aim is to introduce tennis clubs in particular to the sport of padel. As an offshoot of a specialist company for tennis court construction, padel courts including ground construction and ground slab are...

Padelwerk: Padelwerk Court GmbH builds padel courts "Made in Germany". All components of the courts are manufactured entirely in Germany. The German padel court manufacturer Padelwerk provides the planning, engineering and architectural services and the craftsmanship according to German quality standards. Padelwerk advises the customer on request and...

Henri Leconte Padel: Which tennis player doesn't know Henri Leconte, the French tennis pro and French Open finalist from 1988. For some time now, Leconte, with his international expert knowledge and his name, has been committed to the sport of padel. Together with the concept that is important to him...

Padelcourt Biz: The company Courtwall GmbH from Vienna has been building squash courts worldwide for over 35 years, and under the name "The Padelcourt Biz" they also build padel courts. And they do so all over Europe! Since 2017, i.e. since the padel boom really started outside of Spain, the Viennese padel court builder has been able to build the following courts ...