Enrique Corcuera from Mexico is considered the inventor of today's padel. He had the idea for a new ball wall game in 1962. 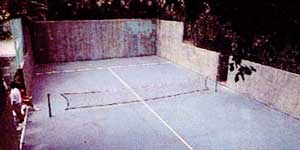 In his residence in Puerto Acapulco (Mexico), he built a wall about three metres high at the front of a small pelota field adjacent to the wall of his house and closed off the two sides of the field with a wire mesh fence. In addition, there was a net in the middle (like in tennis). And off they went with the first basics of padel (or padel tennis).

Correct Padel rules and equipment as we know it today did not yet exist, of course. The padel rackets were even still made of wood! Everything was still in its infancy...

In 1974, a good friend of Enrique Corcuera, Prince Alfonso zu Hohenlohe from Spain, became aware of the new racket sport. He was immediately enthusiastic and also saw the potential of padel. But improvements were needed!

So he started to revise the padel rules and to define the size of the court and the perimeter. But he didn't leave it at the grey theory - after his return to Spain, he built two new padel courts in his hotel Marbella Club.

And he began to cleverly market padel. He organised so-called "Pro-Am" tournaments where the pairs consisted of a professional player and a celebrity. In this way, padel quickly became known to celebrities and sportsmen. Among them were Enrique Iglésias, the Duke of Borbón and Guinlla von Bismark. And the tennis player Manolo Santana was also among them. He organised more padel tournaments in southern Spain. So padel quickly grew into a real trend sport on the sunny Costa del Sol.

Just one year later, in 1975, Prince Alfonso zu Hohenlohe was able to introduce his Argentinean friend Julio Menditeguy and the players accompanying him to the Argentinean Padel polo team. They were immediately infected by the padel virus and in turn built padel courts in Argentina. Here, Padel grew at a similar pace as in Spain. Today, padel is the number two national sport in Argentina, behind football.

But padel was also able to spread to other countries in South and Central America.

In Europe, however, not so much happened outside Spain for the time being.

Until 2010, a padel court was built here and there. But for the time being, there was no real boom like in Spain or Latin America. Padel Germany was also still in a deep sleep.

From around 2010, however, this was to change slowly. The first serious attempts to establish padel in Europe began to take shape, for example in Portugal and Italy. In Italy in particular, there was a veritable explosion of padel facilities and padel courts in Rome and the surrounding area from around 2015 onwards. Meanwhile, one padel club after another is springing up in Italy, currently especially in Lombardy. And also in France (where the former tennis pro Henri Leconte is very active with his company Henri Leconte Padel), Sweden (footballer Zlatan Ibrahimović is investing heavily in padel and building real padel arenas). , Belgium and the Netherlands, padel is growing stronger and stronger!

It was precisely at this moment that the first new padel courts were built in Germany. Among others, here in Berlin were Alexander Hillbricht (Padel Berlin) and Ralf Stoffers (Play the Wall) were among the first to not only build padel courts, but also to make padel known to a wider public for the first time. After that, things went on steadily, but the big boom, such as in Italy, did not happen for a while.

In 2018/2019, however, the development of padel sports in Germany got another boost. With the restructuring of the German padel association "German Padel Federation" and the associated German Padel Tour Padel is also becoming increasingly professional in Germany.

Meanwhile, a new padel location opens almost every month, so that one almost loses the overview. So the padel story continues in Germany as well.

Here we have a current Map of padel courts in Germanywhich is continuously updated! Active padel facilities (orange) and planned padel locations (blue) are displayed.

Direct to the current Map of the Padel courts Germany