What is padel or pádel? What is Padel Tennis?

Actually, padel, pádel or padel tennis is quite easy to describe: Padel is basically a mixture of tennis and squash.

This is why padel is often referred to as padel tennis. However, we (padel players) prefer to speak only of padel, or the Spaniards of pádel! Because padel is an independent backstroke sport that has many elements that do not exist in other sports.

Padel originated in Mexico and is the popular sport par excellence in Spanish-speaking countries (read more about the history of padel here). In Europe, padel is most popular in Spain, but countries like Portugal and especially Italy are catching up fast. Padel Boom in Italy).

Above all, padel is easy to learn and fun from the start. Even newcomers who are on the padel court for the first time can play their first padel match after about 30-45 minutes.

Just ask a padel coach or experienced padel player if they can help and coach a little.

Then it really goes very quickly!

How do you play padel?

For example, like in the following video ("The best padel points of the World Padel Tour 2021"). But you don't have to be able to play that well to have just as much fun!

But of course you can get good inspiration from the padel videos of the padel pros!

Paddle sports are very dynamic and have an almost infinite number of stroke combinations and positional play.

That sounds complicated, doesn't it? But it's not! It just shows that even the most professional players are constantly learning and never get bored.

Since padel is always played in doubles (i.e. with 4 players on the court) and the padel court is only 20x10m, everything is a bit closer, more emotional and more communicative than in tennis, for example. Fetching balls is also almost completely unnecessary, as there is a plexiglass covering around the court.

By the way, there are hardly ever any injuries in padel tennis - provided you warm up a bit beforehand, as with any sport.

Here you can see it well in the photo: 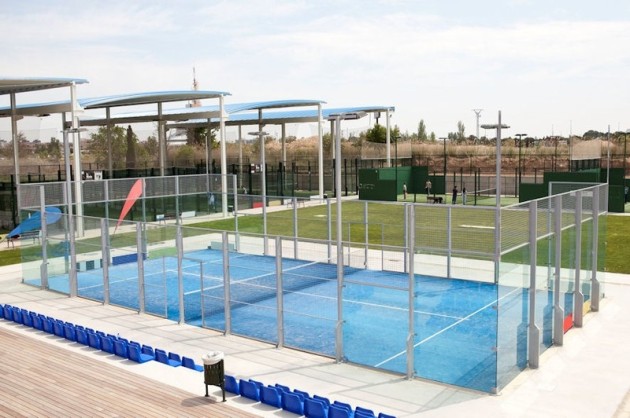 What is padel? This is a Padel Court

The padel rules are almost identical to the tennis rules. However, there are two major differences: