Padel Espelkamp: Since mid-August 2013, the padel facility with 2 courts (dark blue with blue artificial turf and floodlights) has been available at the North Rhine-Westphalian tennis club TV Espelkamp. Hadi Hashemi, 1st chairman of the tennis club, knew Padel from Spain and immediately saw the advantages of the new sport for the club. With the approval of the executive committee, the two padel courts were built on the site of a demolished tennis court.

The circulation has been designed so that padel fans can sit comfortably in the spectator stands and the walk around the grounds is a short one. For those who want to play, simply report to the bistro in the tennis and badminton centre.

Since the opening of both courts, padel has been played there diligently. Padel tournaments are held and the local tennis heroes of the Bundesliga team take part in national tournaments of the Padel Association, also directly on site.

Membership Padel Tennis Espelkamp:
You want to play padel and tennis regularly?! No problem! For only €8.50 per month, you can play around the clock for the first 2 years.

In search of a Padel court in Germany? Take a look at the overview now! 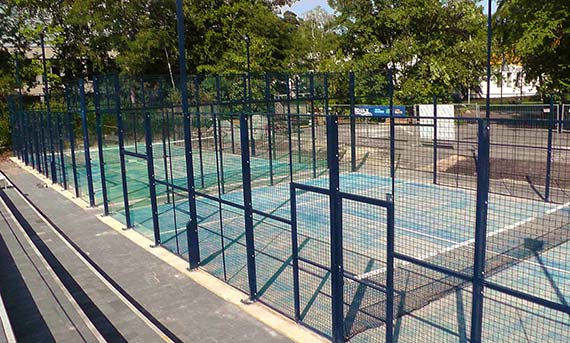 Now padel is finally available directly in Osnabrück (and in the surrounding area: Padel Espelkamp)! At the Racket Sport Park in Osnabrück, you can now play indoor padel (in addition to tennis, badminton and touchtennis). There is also a shop (partner of Babolat) and a restaurant with a beer garden. Opening hours: Tue - Thu: 10:00...

Padel Point Herzebrock: The Padel Point in Herzebrock is located near Gütersloh and Rheda-Wiedenbrück and can be easily reached via the A2 motorway. The Padel Tennis Court is operated by Tennis-Point GmbH.When can you ...

On the grounds of the TC 71 Weyhe e.V. tennis club. (Melchiorshausen) near Bremen, there have been two outdoor padel courts since July 2020. TC 71 Weyhe provides 3 licensed padel trainers for training and taster programmes...

Padel Münster: Padel tennis finally in Münsterland - at the Soccer-Halle Rummenigge! At the beginning of January 2017, work began on converting a soccer field into a padel court at the Rummenigge Soccer Hall in Münster. And barely two weeks later, the Panorma Padel court is already up and running!

Padel Werne: Padel tennis at the Padel Base Werne. Padel has been available in Werne since December 2017! On two indoor padel courts with LED floodlights (720 watts) as well as an outdoor padel court (since August 2019), padel tennis can be played every weekday from ...