Padel UniSport Köln, the first padel facility in NRW. In the middle of the cathedral city of Cologne, on the campus of the university, there have been 2 outdoor padel courts since May 2013 (both with artificial turf and floodlights). It's only a stone's throw to the party mile and the student hotspots, so many people from Cologne and visitors to the city have already enjoyed trying out padel there. The University Sports Centre Cologne is the first university institution in Germany to include padel in its sports programme.

With their padel facility on the grounds of the UniSportZentrum (where the wet and changing areas as well as the catering facilities are also located) on the Zülpicher Wall, they proudly join the great list of sustainable fun sports.

Since 2013, the two padel courts have been frequented more than almost any other facility in Germany. The University of Cologne now offers comprehensive padel activities for its students and all padel maniacs.

In addition to tournament series for all levels and ages, there are regular university league matches, courses, pulls, mixings, etc., and even the first padel coach training of the world federation could celebrate its premiere here. And the sun terrace with seating, music system and barbecue area ensures that a great atmosphere quickly arises during the padel tennis matches.

Cost per seat per hour:

All Padel facilities in Cologne - in one overview! 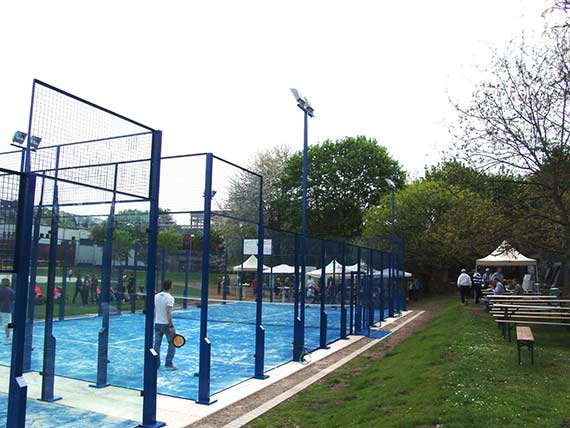 On Saturday, 20.06., a new event will take place with the Adidas Padel Open the first of at least three GPS tournaments this calendar year. So once again the felt balls will be flying around the padel colonia facility for the day's victory and important points in the national ranking. Keyword: Qualification for the German Padel Masters in Herne!

Padel Köln Walls: Germany's largest padel facility is in Cologne. The padelBOX Köln von walls has no less than 4 courts to offer. To ensure that these are also well filled, the Cologne League and the NRW League take place on the facility in addition to tournaments...

Padel Essen: The TVN PADEL is located in the TZE (Tennis-Zentrum Essen), one of the leading tennis support centres in Germany. It is no coincidence that the Association of German Tennis Teachers (VDT) has its home here. In addition to 14 indoor tennis courts, there are now also 2 indoor Padel courts...

PadelWorld Bochum: Germany's largest padel facility is currently being built here with 4 outdoor padel courts to start with. Soon, the facility will even be expanded to 8 or more padel courts. With this Padel in the Ruhr Area more than arrived!

Four padel courts will open in Dortmund in autumn 2020: 2 outdoor padel courts and 2 indoor padel courts. The former football hall in the immediate vicinity of the Signal Iduna Park at Bunsen Kirchhoff Straße 9 is currently being completely renovated. From November onwards, there will be a multi-sports facility with football, padel and a multi court for basketball etc....