Padel cracks with top matches at the GPT 1.000 in Essen 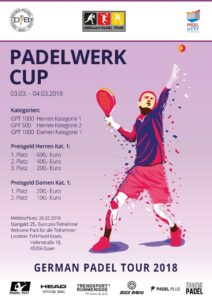 At the weekend, 1,000 people met in Essen for the GPT (German Padel Tour) Padel cracks from Spain, Argentina, Germany and the Netherlands competed against each other. In category 1, World Padel Tour players, national players, German champions and aspiring top players faced each other - so it was already clear in advance that there would be padel at the highest level. And the spectators were not disappointed!

In the quarter-finals, the favourites prevailed quite confidently - Nowicki/Ferreyra, Böhnke/Messerschmidt, Bruijsten/Boers and Meijer/Maarsen all won their matches straight in two sets. In the semi-finals Nowicki/Ferreyra won 6:0 and 6:1 against Böhnke/Messerschmidt, while the other semi-final (all Dutch) was quite close. It was not until the third set that Meijer/Maarsen won against Bruijsten/Boers - the final score was 4:6 6:4 6:3.

Since Meijer/Marsen not only had to go through 3 sets, but also had to play a preliminary round match, they lacked the strength to stand up to Nowicki/Ferreyra in the end. So the German-Argentine duo Nowicki/Ferreyra won the final 6:1 and 6:2, which was a bit too clear.

In the match for third place, Bruijsten/Boers won 6:2 and 7:5 against Böhnke/Messerschmidt, but had to tremble a little at the end of the second set.

Finally, there was an award ceremony with all the players and the DPB Chairman, Jörg Messerschmidt, as well as Thomas Lönegren as Vice President of the DPB, who presented the trophies to the padel heroes. Thanks were also given to the sponsor of the tournament, the Padel Platz manufacturer. Padelwerk.

In category 2, which was already played on Saturday, excellent padel could also be seen! Here, however, no knockout system was used, but four groups were played. In the first group of the German Padel Tour Category 2 in Essen, Mike Henning and Stefan Jaudschus from Essen prevailed. In the decisive match for the group victory, the two won surprisingly clearly against Arnd Schade and Nacho Alonso from Münster with 6:2 and 6:2.

In group 2, Holger Gehrke and Christian Pruß celebrated their premiere on the German Padel Tour and won the group in a commanding manner!
Two games two wins - a great performance by the two padel newcomers!

Group 3 was dominated by Marcel Maltritz and Stefan Kohlmann. The two players from Witten did not give up a single set in their group victory!

Group 4 could not be topped in terms of excitement and gripping rallies on the first day of the Padelwerk Cup! Jordi Gorrea - Daniel Pantoja from Tauberbischofsheim, Thorsten Hirsch - Markus Hohefeld from Werne and Kieron Gerbig (Recklinghausen) - Rafa Plasencia (Münster) each had one win and one loss at the end of the group phase! Not match points, not sets but even games had to be counted! The lucky group winners were Jordi Gorrea and Daniel Pantoja after the count!

The first semi-final of the group winners (category 2) was nevertheless clearly won by Stefan Jaudschus and Mike Henning after many long rallies against Holger Gehrke and Christian Pruß with 6:0 and 6:2. In the second semi-final, Marcel Maltritz and Stefan Kohlmann from Witten won 6:3 and 6:3 against Jordi Gorrea and Daniel Pantoja from Tauberbischofsheim. The final could not be played due to the late playing time and will be made up shortly.

All results and photos can be found below:

Results of the 1st category

Semi-final of the side round (category 1):

Final of the side round (category 1):

Results of the group matches:

-> will be made up shortly

The Padelbase Werne Open as the first padel tournament of the German Padel Tour 2018 will take place as GPT 1,000 (Men's Category 1) and GPT 250 (Men's Category 2) on 3 and 4 February in Werne. Host Simone Hirsch played the fairy godmother and drew lots of exciting matches.

The men's category 2 will take place on Saturday from ...

The German Padel Federation has professionalised its federation structures in 2017, among other things also through new statutes and updated membership fee regulations (General Assembly in Essen in October 2017) and will continue on this path in 2018. The DPB's new sports director, Jani Gisbert, will also play an important role in this. The former padel professional with...

German Masters - Final of the German Padel Tour in Essen

The padel duo Daniel Lingen and Claudius Panske was able to win the GPT-1,000 tournament of the German Padel Tour (organiser: German Padel Federation) win. However, the way there was anything but easy! Because: the probably strongest field of participants of the year met in Essen for a trial of strength...