GPT 500 paddle tournament in Frankfurt - these are the winners

After a top-class preliminary round, the following teams made it to the final four of the German Padel Tour 500 Paddle Tournament (Men's Category 1):

In the final, Darek Nowicki & Oli Schwörer won against Fabian Schmidt & Oli Strecker with 6:3 and 6:4.

In the match for third place, however, it was much tighter.

Jonas Messerschmidt & Christian Böhnke lost the first set 5-7 to Marvin Eckert and Oliver Strauss, but then went one better in the second set and won 6-3.

So the decision had to be made in the third set.

Jonas Messerschmidt & Christian Böhnke then won this one by a very narrow margin of 10:6.

All in all, strong matches from the preliminary round to the final.

And how and where do we go from here?

Quite simple. From 20.06. to 23.06. Germany's biggest paddle tournament will take place in Karlsruhe.

Men and women of all levels can compete in 8 categories.

Here you can find more info on the 2nd Karlsruhe Padel Open.

And here are a few more photos from the weekend: 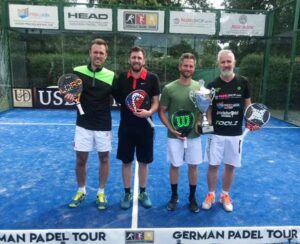 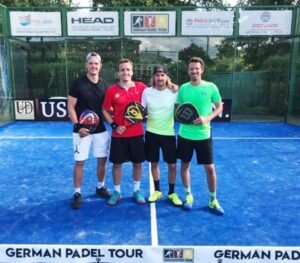 Minutes of the Annual General Meeting of the Deutscher Padel Bund e.V.

German Padel Federation:Date: 30.03.2019Location: Clubhouse of the T.C. NiddaparkParticipants: 37 of 99 DPB members, of which 31 were entitled to vote 1. Welcome and establishment of the quorumMr Jörg ...

First-class padel at the men's GPT 1,000 in Münster

At the weekend, Münster hosted the third paddle tournament of the German Padel Tour (GPT) of the year took place. There, first-class padel was offered in the men's 1 and men's 2 categories, so that the spectators also got their money's worth.

In the Men's 1 category, our neighbours from the Netherlands prevailed (once again). Peter Bruijsten and...

Padel cracks with top matches at the GPT 1.000 in Essen

GPT 1000 - Padelwerk Cup at TVN Padel Essen: At the weekend, padel fans met in Essen for the GPT 1,000 (German Padel Tour) Padel cracks from Spain, Argentina, Germany and the Netherlands competed. In category 1, the...